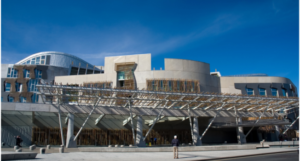 A motion has been submitted to the Scottish Parliament by Brian Whittle MSP for South Scotland,  asking the Parliament to congratulate the HALO Kilmarnock Enterprise and Innovation Centre on winning the Regeneration Project of the Year award at the Scottish Property Awards.

That the Parliament recognises the success of HALO Kilmarnock at the Scottish Property Awards, where the sustainable, mixed-use development won the award for Best Regeneration Project; understands that the HALO Enterprise and Innovation Centre, the first phase of the project, opened in January 2022, bringing large established companies together with entrepreneurs and SMEs to foster innovation and create an accelerator for entrepreneurs; recognises what it sees as the project’s commitment to the environment through its sustainable design ethos and the use of zero-carbon electricity across the site; understands that the project has been funded with £3.5 million from the UK Government, £3.5 million from the Scottish Government and £2 million from East Ayrshire Council as part of the Ayrshire Growth Deal, in addition to £2 million from Diageo, which, it understands, was the former owner of the site; applauds the efforts of all those who have supported the development over its 13-year history; congratulates the team behind the project for winning this award, and wishes HALO Kilmarnock every success in the years ahead.