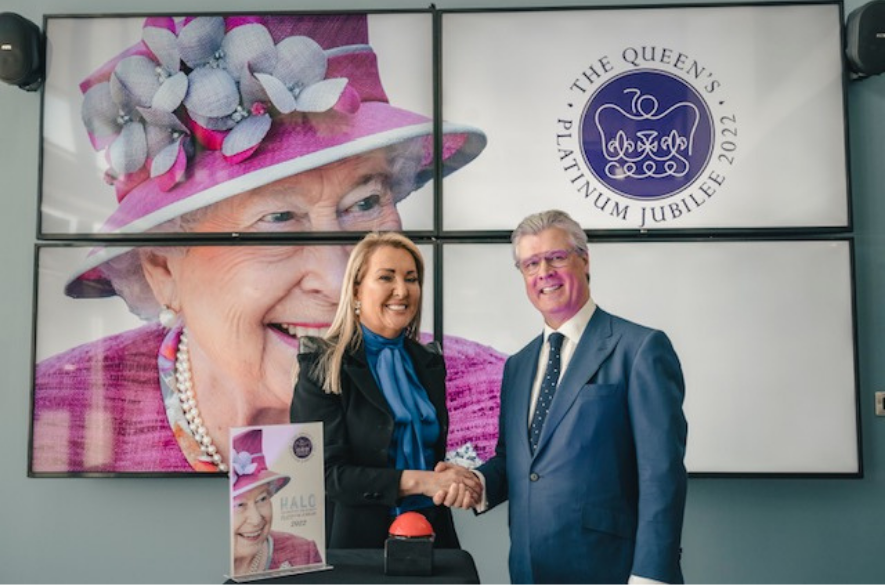 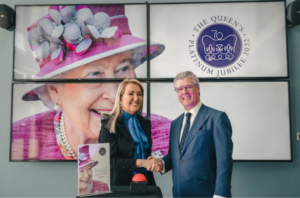 To mark  the Queen’s Platinum Jubilee, Lord Malcolm Offord, the UK Government’s Parliamentary Under Secretary of State for Scotland, has switched on the HALO Kilmarnock’s light in purple – a nod to the official colours of this week’s celebrations.

This year, Her Majesty the Queen will become the first British Monarch to celebrate a Platinum Jubilee after 70 years of service. Her Majesty’s historic reign is being recognised all over the UK as the Platinum Jubilee Central Weekend takes place, from the 2nd to 5th June.

On a recent visit to the HALO Enterprise and Innovation Centre, Lord Offord was shown how the world class facility in Kilmarnock is setting the standard for low carbon energy sites across the UK.

During his tour of the state-of-the-art building, Lord Offord also visited the HALO’s Barclays Eagle Lab which is supporting start-up and scale-up businesses from across Ayrshire who are building and growing specialised digital and cyber businesses.

Marie Macklin CBE, Founder and Executive Chair of HALO Urban Regeneration Company, said: “To be celebrating a Platinum Jubilee is a wonderful achievement for Her Majesty the Queen who has served the UK so admirably and with such dedication for 70 years.

“I am really proud to be marking this magnificent milestone by lighting up the HALO as a tribute to Her Majesty in dedication to the Jubilee celebrations. Everyone at the HALO would like to thank Lord Offord for taking the time out of his busy schedule to switch on the light in honour of the Queen.”

UK Minister for Scotland Malcolm Offord said: “It was a pleasure to visit the HALO and see first-hand all the fantastic projects developing there with the support of £3.5m each from the UK and Scottish Governments through the Ayrshire Growth Deal. It’s fitting that they’re lighting up their Ayrshire HQ with the Queen’s jubilee colours because this weekend not only gives us the opportunity to congratulate Her Majesty on her 70-year reign, it also encourages us as a nation to look to the future – and that embodies everything that the HALO stands for.

“We have a fantastic four-day weekend of celebrations ahead of us and I’d like to send my heartfelt congratulations to Her Majesty on reaching this very special milestone.”

Thirteen years in the making, and the vision of Marie Macklin CBE, The HALO Kilmarnock is a £63m brownfield urban regeneration project on a 23-acre site, formerly the home of Johnnie Walker, designed to maximise collaboration between entrepreneurs and UK PLCs.

In partnership with ScottishPower, The HALO explores energy innovations for a lower carbon society and harness the utility’s business and technical expertise to support start-up and scale-up businesses located at the site.

The award-winning Enterprise and Innovation Centre was named ‘Best Regeneration Project’ at this year’s prestigious Scottish Property Awards and recognised as Scotland’s ‘Best Corporate Workplace’ at the 2022 British Council for Offices’ Regional Awards.